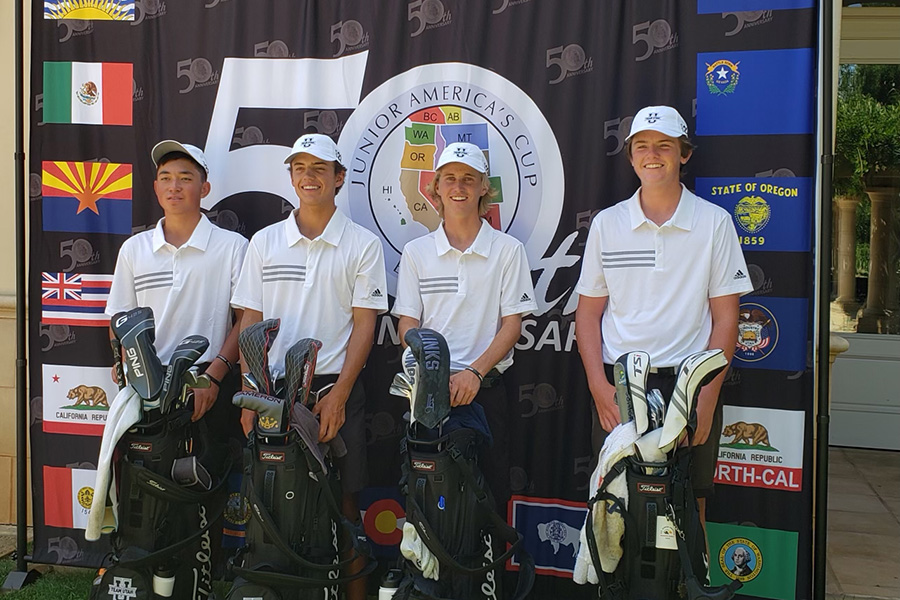 The second round of the 50th Annual Junior America’s Cup, hosted by the Junior Golf Association of Northern California, is in the books with Utah firing a 13-under par 203 in Round 2, to take a seven-stroke lead over Arizona and Mexico 1. Utah is at 19-under (423) for two days heading into the final round. Leading the way for Utah was Parker Bunn who tied the course record shooting 63, including a back nine, 7-under par 29. He started his back nine with six strait birdies. Utah’s other scores include Kihei Akina’s 69, Cooper Jones’ 71 and Boston Bracken’s 75.

Arizona and Mexico 1 are tied for 2nd place, at 12-under par, team totals of 430. Arizona shot an 8-under par 208 for round 2, while Mexico 1 shot 2-under 214. Rylan Johnson continues to pace Arizona, as he leads overall individually after shooting 2-under par 70, for a two-day total of 8-under par 136. Additional Round 2 scores for Arizona include Carlos Astiazaran and Johnnie Clark who both shot 69’s, while Adam Miller fired a 1-under par 71. Mexico 1 is lead by Eduardo Derbez who was the round 1 co-leader. Derbez shot even par 72 in round 2, as he sits at 5-under par 139 and is tied for 5th place. Additional Round 2 scores for Mexico 1 include Manual Barbachano who shot 69, Rafael Estrada who shot 73 and Francisco Solorza who shot 75.

The 2022 competition marks the 50th anniversary of the Junior America’s Cup championship and the fourth time it will be held in Northern California. The previous time the event was

hosted in Northern California was 2004 which was at San Joaquin Country Club, in Fresno, California. The team from Mexico won the championship that year. Junior America’s Cup Alumni from the 2004 Championship include Tony Finau (team Utah) who just won PGA Tour events the past two weeks, as well as Andrew Putman and Kyle Stanley.